One Thursday morning while doing irrigation service calls for Living Water irrigation with My manager, We responded to call the simply stated “heads were not working.”

My manager, who is a seasoned  professional, has always taught me to start from the beginning of the system and always walks through the whole system before doing anything regardless of what the description of the service call is.

So once we got to the home we knocked on the door and spoke with the homeowner just to see her description of the issues so that we would have an idea of what to look for.

The homeowner said that the past season all the heads in the front yard has quit working and were no longer popping up or supplying water to the yard.

She was very eager to take advantage of how slow the winter time is when it comes to Tulsa sprinkler repair and irrigation service repair, as in the summer, it can become very busy and often times we are booked out for weeks.

So starting with what the manager has taught me, to start at the beginning of the system that’s exactly what we did. We first went to the water meter to make sure the water was on.

This may sound silly but often times you will find there are more than one water meter or maybe they had shut the system off themselves and forgot to mention it.

After verifying there was only one water meter moved on to finding a shut off valve.

On this particular system there was not a shut off valve that we could locate anywhere. From the shut off valve we started to look for the backflow device.

The backflow device is a part of the irrigation system that keeps your irrigation water from leaking back into your drinking water.

This is important because irrigation water can often times collect dirt or chemicals in your yard and poison your drinking water.

Once we found the backflow device we verified that it was in working order and then it was on with no leaks. From the backflow, we moved to the controller which was located in the garage.

The controller is the brains of the irrigation and Tulsa sprinkler repair system. The controller has programs and start time set up to run your irrigation system automatically without you having to worry about turning it on or off.

At the controller we verified how many zones we were looking for by checking how many wires were wired into the device.

Each zone wire runs to a zone valve. Zone valve is a valve that sends water to each part of the yard into the heads to water  the designated area. So once we made it to the controller and verify how many zones we were looking for we tried to run each zone.

We went through each of the six zones as I walked around the house to see where each zone was located and how it ran. We were surprised to see that not a single zone appeared  to work, water never showed up anywhere. Tulsa sprinkler repair was needed everywhere!

Since none of the zones worked from the controller we were forced to go to each zone valve and try to run it manually. The hard part about this was that there were no valve boxes to be found.

Lots of times valve boxes can be buried or lost overtime or by changing landscapes. Often times the quickest way to find a valve box is to simply take a shovel and just poke around the common areas found boxes are normally located. We poked  around for  roughly 10 or 15 minutes.

My manager told me that normally we do not spend that much time using this technique to find valve boxes but since I was new he was trying to teach me a few things. Another way to find a valve box is by hooking up a wire locator.

Wire locators are device that you can hook up to the wires in the controller that sounds a signal through the wires that can be located by a hand held wand that can detect the signal that’s being sent.

Every valve has a wire that runs from the controller to each valve box. So this method of finding a valve is much more efficient if you cannot find where they are located quickly by poking with a shovel. The next step after finding the valves is to manually test each one.

To manually test the valve you can open the bleeder valve that is located on the actual valve and see if it allows water to go through and if the zone pops on. Another way to test the valve is to partially open the solenoid.

Typically when you open the valve if the valve is fine the zone will come on like it supposed to turn off when you close it. If that would’ve been the case we would have checked for electrical issues starting with the solenoid and then proceeding to check for a break in the wire.

However, it appeared the valve was not releasing water which told us that for sure the valve was bad. Since these particular valves appear to be very old along with all of the valves simultaneously ceasing  to work, we decided that all of them should be replaced. So we got to work digging them up one by one so that we could cut them out and place in a new one.

Once I got all the valves replaced and re-wired to the controller we started to test them. Once we got to the final zone it still did not work. This was very confusing to us because all of the other zones were working properly so we figured we had to have done something wrong on that particular zone valve.

We went to that zone valve and realize we had actually missed one wire and just reconnected it correctly and retested it. It worked!

Once we got the entire system working properly we finished walking through the system from start to finish as we had begun to test for any other issues. We found some broken heads and some that had just popped off.

We completed all of these Tulsa Sprinkler Repair and had the system running as should. This particular repair is one I will never forget. I ended up getting covered in water from head to toe by making rookie mistakes that I’ll surely repeat it again one day they say, but I’m determined to not

Tips and Tricks of the Tulsa Sprinkler Repair Business

Electric Irrigation valves are one of the most important parts of an irrigation system.

The controller will send an electrical signal to the valve telling the valve whether to open or close which restricts or opens to to control the water in your irrigation system.  There are two common uses for electronic irrigation valves on a sprinkler system. The first one will talk about the master valve.

The master valve acts the same as a shut off valve except it is electronically controlled and not able to be manually shut off for maintenance.  If you have a master valve it is usually located after the backflow device in a proper Tulsa sprinkler repair installation. The purpose of a master valve is to restrict water from the rest of the system when none of the other zones are on or operating.

Also, if you have a leaky system or a break in your irrigation system, A master valve will keep the water from reaching those lines and prevent you from losing water constantly.

This is very handy because if you have a leak A Master valve automatically shut off Water to the leak and prevent any further loss of water while the system is off. The downside to this is if you are not paying attention to your system while it’s running you may never know that you have a leak. If you’re not paying attention to your system you may have a leak that is constantly dumping water while the system is running and then drying up once the system is off preventing you from realizing you have an issue and need some Tulsa sprinkler repair.

Another type of valve is what’s called a zone valve. Every zone will have its own valve that opens and supplies water to the individual zone when sent the command from the controller.

Let’s talk about the some of the most practical troubleshooting solutions for electronic irrigation valves and how they come into play during Tulsa sprinkler repair. The first way to troubleshoot one of these valves is by simply checking to make sure the water is on and being supplied to the system. To some this may sound obvious but more times than you would expect this will be simply the case.

Sometimes an irrigation system will have its own water meter and it may be shut off for one reason or another.

Allowing water to Pass by making sure the handle is in line with the pipe. If you have an automatic master valve will troubleshoot this Tulsa sprinkler repair valve but the same steps we have talked about and the rest we’re going to go over.

However a master valve should be installed after backflow device which is what we are going to talk about next. By checking the

backflow device again ensure that the handles are in line with the pipes this tells you that they are open and allowing water to pass.

At each of these valves, the manual shut off valve and the backflow, you can also check that water is being passed by shutting it off and re-opening it and verifying that water rushes through. You’ll be able to tell by hearing and feeling the pressure of the water as it passes.

After you have verified that water is reaching each of your valves start by testing each valve itself.

To test a valve you can open the bleeder valve and see if your zone comes on or if you hear water rushing through the pipes. Another way to test but also less recommended is by partially loosening the solenoid as this will allow water to pass as well.

If you manually open the valve and the zone still does not come on there’s a solid chance that the valve has gone bad. You can either cut out the bad valve and replace it with a brand new one or you can rebuild it if possible.

Rebuilding a valve is simply taking the top part of the valve off carefully avoiding any dirt or debris entering the valve and replacing the components inside of it. 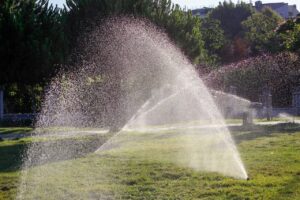 The components are a plastic ring, the diaphragm and the spring paying attention to install it exactly the way he took the old one out and is aligned properly. However before cutting a valve out or rebuilding it, take a lap around the yard to make sure you don’t see a broken head that is leaking, this will also keep the rest of the zone from working if water was not being able to make it to the heads because of a leak at start on the zone.

And the easiest way to check the solenoid is by simply removing the solenoid and replacing it with a new one as it is just a simple unscrewing and re-wiring a new one.

As an anything these are not all the troubleshooting steps or possible scenarios but they are the most common and will get you started.