When it comes to Tulsa sprinkler repair, Living Water is the supreme choice a lot of times.

Maybe some of the valves on your irrigation work need repair. I went to a Tulsa sprinkler repair call yesterday where there was a busted lateral line but also there was the backflow which had freeze damage and was busted.

I spoke with the customer and they were willing to fix the broken lateral lines which I had to repair by using the 4 90 method. but I told them the system is going to have a constant leak unless they repair the PVB backflow.

They were also willing to repair the PVB backflow and had no shut off valve or isolation valve. I told him I could repair the backflow but there was a great chance that the backflow would get freeze damage again without having to isolation about prior on the endless side.

I told them that it was going to cost around $300 for us to put in isolation there would be no freeze damage in the future. protect your PVB backflow because these backflows are the most expensive piece of the irrigation system.

By installing this isolation valve we would have been able to properly winterize the sprinkler system getting all the water out of the backflow which during a freeze expands and will bust the brass parts inside the back flow.

Freeze occurs the pressure going to this backflow will cause it to bust during freeze because the pressurized water inside the backflow expands and literally during this winter season we’ve probably fixed around 30 to 40 back flows myself alone this cost customers a lot of money so this is why it is so important to get your sprinkler system winterize and allow us to ensure that you have a properly functioning isolation valve and backflow.

It is oftentimes difficult to determine whether a customer has coverage issues just by running through the zones.

During the hot summer it is easier to tell where coverage is lacking by where the grass is not as green as it should be. a lot of times during the winter coverage but some areas need more water than others depending on the variables so it is easier for us to take a look at these things during the summer when the yard needs water the most.

They were grateful to hear this and maintained the entirety of the relationship with this particular customer. This is just one instance of coming to a backflow this winter that is completely busted and is dumping water out on the yard. It often looks like a lake out there where the water is dumped onto the yard.

This costs a customer money and can result in a high water bill. This is why it is so important to winterize your system before these freezing temperatures if your backflow is outdoors and not inside.

Give Living Water a call for all your irrigation repair needs.

We are an extremely dependable company who would love to come take a look at your sprinkler system and assess any damage or let you know if there are any improvements or parents that we can make for you.

The Tulsa Sprinkler Repair work we do is at a higher level than competitors.

This is what separates us from the competition.

We really care about the value of the dollar and we care about taking care of our Tulsa sprinkler repair customers. When we get there we ask some questions and see what the customers knows beforehand about the irrigation system.

We will then go to the controller and run through all the zones and assess any damage or broken pipes or other things that may be going on with the system.

After assessing these things we will take a look at all the zones and determine whether there can be any changes made to the nozzles for added coverage. Heads may need to be switched to a different type of head or even adding heads. Typically adding heads is more difficult and costs the customer more money.

This is because it takes us significant time to dig a trench and re-pipe the added head to its desired location. Sometimes this is the only way to fix the issue of lacking coverage.

The crew that installed the system may of not saw a certain spot or made a mistake in mapping out the zones. A lot of times this isn’t too big of a problem because we can normally add a head if the zone doesn’t already have too many heads on it or if there is enough water pressure.

We even offer Zone redesigns, sometimes this is the only way that we can solve lacking coverage issues. This normally takes us 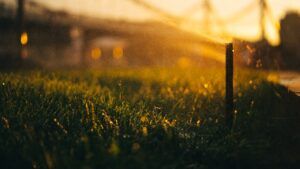 around 3 to 4 hours and can cost a customer around $1,200 but when there is a Zone in place and that zone was not put in very well, redesigning may be the only way to solve the coverage.

It is so important to make sure that there’s adequate coverage because without proper watering Landscape and sod can die and wither away which is a waste of money when it comes to installing these things.

When it comes to coverage Living Water can’t be beat. We have amazing ways that we run through our zones and take a look at areas that may need more coverage or may need some overlapping.

Certain areas without shade or where the sun is beating down pretty hard. If there’s an area that is getting sufficient watering and may even be overlapped with certain heads we can just reprogram the controller and add times or add days to the watering schedule so that this area gets watered more often. It may not be a coverage issue but more so a scheduling issue.