We can do sprinkler installations, sprinkler repairs, irrigation, and more for OKC and the surrounding areas including:

The last time the population was counted was in 2021. 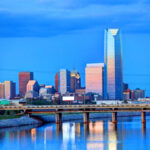 The homeowner can call Living Water Irrigation OKC to have them install a new sprinkler system in their yard.

It is not something they have to get done right away but if they would like to have it done they can call Living Water Irrigation OKC for a quote.

The quote is good for six months!

For a normal install there is a irrigation crew of around 5 workers that come to the house to install it.

There is one crew leader for each crew. Sometimes there will be more than five people depending on what other work needs to be done.

These trenches are not very deep, just deep enough for the irrigation pipes.

Sometimes the crew will dig these trenches with a shovel if they need to, if that is not needed they will use a trencher.

If they use the trencher it is a large machine that looks like it has a large chainsaw on the end, this was the crew member that is using the trencher can cut through all tree roots and dirt.

The crew will use the pvc pipe that is needed to lay out the sprinkler system and make sure the water is running the right way.

They will also run new wire in the sprinkler system to make sure the system can run by the controller.

After the crew is done installing the pipes and wires that are needed they will bury all the lines on the sprinkler system.

There will be dirt tracks in the yard but the grass will grow back over them.

Once they are done the crew members will let the office staff know we need to call the homeowner to schedule a demo of the new system.

When the demo is scheduled, someone from the office will come out to the homeowners house to show them how they use the new system.

If the homeowner has any questions about the system that would be the best time to ask and they can be resolved.  After the sprinkler system that was installed by living water has been run through, the controller will be set by the living water irrigation employee.

The employee will ask the homeowner that had living water irrigation install the sprinkler system how often they want the system to run.

If the homeowner would like the system to run on just special days the employee from living water will set that up and make sure it only runs when the homeowner wants it to.

The employee of living water will tell the homeowner that it is best to run the system in the morning before the sun comes up. 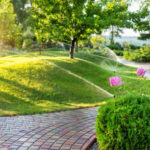 This is because of how hot it can be in Oklahoma city, Oklahoma during the summer time.

If it is run too late in the day it will dry up before it can help the grass. Once the controller is set for the homeowner in Oklahoma City, the Living Water employee will then take the last payment for the system for the homeowner.

After the homeowner has paid they are free to use their system how they wish.

If the homeowner ever comes across with the issue with their system, the homeowner will be able to call the office to schedule a service call.

A tech from Living Water Irrigation will come to the home in Oklahoma City, Oklahoma.

Living Water Irrigation offers a warranty on all their sprinkler systems.

This means if certain issues come up after the system is installed, it will be free.

The tech from Living Water Irrigation OKC will access the repair and then they will decide if it is warranty or not.

Before they fix the issue they will let the homeowner know in oklahoma city, oklahoma. The homeowner will then decide if they want it fixed.

Living Water Irrigation OKC is a Christian based company and they deliver the same love and compassion that we are taught in our readings.

They show true dedication and passion to all their customers and daily workings to always exceed customers expectations. It all began with the installation of the irrigation system and expanded into the art of:

Now, as the dream to provide the best service of any irrigation Tulsa OK company has grown, they have also extended their service areas into Edmond/OKC Oklahoma and made it all the way to McKinney, Texas.

While they have been working hard to grow these extensive relationships and services they are now in return able to offer some amazing amenities with their installations.

When you get an install done with Living Water your estimate is free.

They will come out and walk the property with you and explore all the options you have to reclaim your outdoor living space.

There is full transparency and continuous communication through the entire install process.

Their ultimate goal is to always take care of their customers BEYOND the expectations the customer had from the first time Living Water stepped a boot on their property.

They have staff ready and available at all times through the whole process to take care of any of your needs, and the irrigation Tulsa OK service doesn’t end when the last trench is filled. 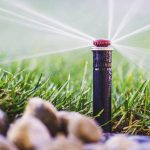 When the install has been completed they have a great follow up with a demonstration of how the system works and they walk through the controller and stations with the homeowner to confirm maximum satisfaction with their product.

The best thing about their work is the possibility that the restoration of customers’ irrigation systems does not always end with needing to completely renew their sprinkler system.

Living Water has mastered the ability to completely redesign your whole view on your landscape watering system. They can redesign your system in any way you see fit to optimize the life and presentation of your home and landscaping.

This company also has a wide variety of employees that specialize in different departments but they come together to make the experience with them seamless from start to completion.

During their winter season the work does not end even though they have winterized all of their customers’ irrigation systems.

Their outdoor services offer Christmas light installation and removal for the holiday season.

In fact, not only will Living Water outdoor services take care of installation, they will also store your Christmas lights at their irrigation Tulsa OK location so you don’t have to. 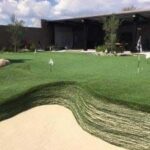 The outdoor services branch also offers a wide variety of services. Are you a golfer? They can install a putting green right in your backyard and it even comes with customizable flags with your favorite sports team, business logo, or family name.

Do you have areas in your yard that are too difficult to maintain or a sports field that needs a new fresh look? They also install turf!

There is not a yard they can not upgrade or maintain. Living Water outdoor services can also redesign your landscaping. They are very knowledgeable in their plants and trees and can use that amazing knowledge to make your home an oasis and make it shine with its curb appeal.

When you have a home, the way it looks is something to be proud of; it’s a showcase piece. Living Water Tulsa is now the one and only distributor in Tulsa for Jellyfish lighting!

Which means you can showcase your home with different lighting colors and patterns every night.

Living Water Tulsa has outdone themselves and have exceeded all expectations and made their business a one stop get it all business.

At Living Water Tulsa they provide the top tier service to their irrigation Tulsa OK customers.

They offer so many services so you don’t have to search for multiple contractors. Living Water also has a Worry-free watering membership available for all their customers.

It is an annual membership and it really is worry free. They contact you for all your seasonal check ups, system startup and winterization so you don’t have to think about it.

They take care of the whole process for you and have their team available 24/7 for any emergency you and your irrigation system encounter.

They are there for you. Living Water really lives by ‘give me a drink’ and you are given Living Water. They will show up with helpful hands and passionate integrity to meet all your needs for you and your home.

Do not hesitate to reach out to Living Water in Tulsa Oklahoma and allow them to service you.

Your First Service Call with Us is Only $1!