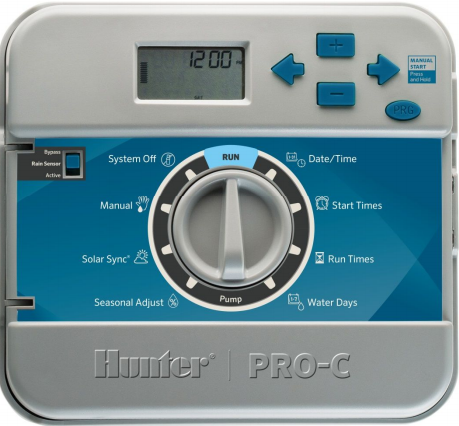 The importance of having an updated controller is significantly important to getting proper water output in your sprinkler system.

Old and outdated controller just don’t get the job done efficiently. There are also things that can go wrong with your controller and you wouldn’t know it unless you watched your sprinkler system everyday that it ran.

Let’s get into the details on what could possibly go wrong with your outdated controller. First and foremost, your controller could have some bad connections in it causing it to not water a certain zone or just not water period.

This is something you don’t want to happen especially if you want to keep your yard and plants up to date on their watering. This will cause you to start seeing brown spots or dry spots where you are getting any water in the certain zone. If you do have this probably it could be that you need a new controller. Now there are a variety of new and updated controllers out there on the market, but we recommend Hunter controllers because we believe them to be the best in the industry.

We have multiple options when it comes to controllers from Hunter. There is a controller that you can manage everything from an app on your phone to just a basic turn dial controller.

There are also items that you can add on you controller that will prevent your system form running on days that it rains it gets too cold. We call this item a rain/freeze sensor. They come in very handy on managing your watering when it doesn’t need to be watered.

There are also wired and wireless ones. Wireless is definitely there way to go because you avoid all those wires and the burden that comes along with them, such as having to hide the wires. Let them know what you have some programming issues in your controller. This is where the hunter and rain bird can be a little bit more confusing for homeowners because of the myriad of options that occur.

The great thing about the hunter controller, the pros see, which is their most prevalent digital controller. Sprinkler Repair Tulsa It has an option there, where you can lock out the programming so where I can set it where they will only water once a day at this. Given time and I can lock that program, so your kids are you or the teenager or the lawn guy.

We get a lot of situations where the lawn guy will come in and reprogram the controller cuz he feels like he needs less water or more water or whatever and a lot of times. They really don’t know what they’re doing so. They went in and just completely messed up the programming, and it’s just cycling over and over and over again.

That’s where we’ll talk about start times versus run times and the big difference in those so very, called we get the other one that we get the most commonly for a sprinkler repair in tulsa on controllers is just reprogramming the controller. Sprinkler Repair Tulsa Someone went out there and started fussing with it,. You remember I’m busy hours, morel would always flash 12 at that little village, you open the front and there’s a there’s, a hamster wheel in there’s a hamster to a living.

Yes yeah, it’s chinchillas in there, though, yes i, do remember some of the same way that everybody always left their vcr to blaine to blink noon or midnight, whichever you prefer to buy stuff for yeah yeah. Sprinkler Repair Tulsa So it was always flashing 12, because no one could ever figure out how to set the time on the vcr.

So what happens a lot of times as well? Get home owners who will be very ambitious will be very motivated and they want to reprogram their controller super simple to do if you’ve done it a few times, but also you can very simply go in there and get it all messed up where it’s doing all kinds of things are the most common things we see with a controller is and when I was telling you about unplugging it is someone has went in and they’ve adjusted the start times so the time that the controller is telling the scheduled program to begin.

Under start times as you’ve now cause your sprinkler system to run 6 times in a row:wow, okay. So what you’re?

Actually wanting to do is adjust your run times run times would be how long each individual’s own is going to run for once the controller tells it to begin so, for instance, on a rotors, and we have that set for 20 minutes.

So the controller is going to tell zone 1 the front yard rotors to begin and is going to run for 20 minutes at the end of that 20 minutes. It’s going to send a stop signal back to that solenoid to seal again and send a signal to zone two to begin, so we get a lot of times where homeowners will get in there and mess with that and cause multiple start times so multiple start times all that’s doing is cycling the system over and over and over and over again so obviously doing so you’re putting a whole bunch of water on your yard, which is not healthy for your yard.

Cuz you’re, simply over-watering. It Sprinkler Repair Tulsa. I hope you enjoyed this little section about controllers. Thank you.