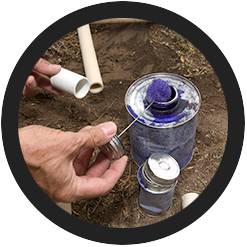 Hunter
To get a sprinkler installed. Just give living water, irrigation, a call. We will be happy to come out and install your spring clear for you. We do have a very good job. We start with the back or the isolation valve. Go to the back, flow into your valve boxes, which then water is your yard. Um, it is controlled by a controller, uh, and there are multiple different kinds of controllers that you can get there. It’s just a normal manual spin dial controller that you can program to water certain days of the week and at a certain time and a certain amount of time. And then there are our wifi controllers, which allow you to do all that and control it from your phone, from basically anywhere that you need to control it from. So if you’re on vacation, need to change it up, you can change it up from your phone and it will change at your house. Now there are different kinds of back flows as well. Now the back flow is dependent on where your house sits compared to where the back flow is. So if your house is high up sprinkler install. Hunter

bend, your back flow is lower than your house or lower than any of the sprinkler heads, you’re going to want a different, um, backflow than most people would have because you needed a dual check back flows what you need because the gravity will cause if you do a normal backflow, it’ll cause it can be pushed back. The water won’t be stopped because the PGV works off of gravity, but too much gravity and it won’t do its job. So he needed a dual check. So there’s two check valves in the backflow. So it prevents that from happening. Now valves, valves have two different or not too different, I’m sorry. There are multiple different kinds of valves. The most common ones are hunter valves, uh, rainbird valves sprinkler install Hunter

and whether Madec files, no, what we use our hunter valves because they’re the most reliable and they don’t break or have problems nearly as much as say a rain bird. Val does a rainbird valves and notorious for having problems. It’s just the cheaper valve and it just doesn’t get the job done. Sometimes it’s and they run or they go bad quicker than most valves? No, for an isolation valve it doesn’t really matter what kind of isolation valve? Well, I say that, um, there are metal isolation valves, there is a gate valve, which is also a type of isolation valve. And then there’s just a normal ball valve. That’s now what you want to put in your system is a plastic ball valve because if you put a metal gate valve, which is what they used to do when back when sprinklers weren’t properly installed, if you put a one of those in it, over time it’s going to rust and then it’s going to eventually break off and you’re not going to be able to either close it or open it and that’s not good. sprinkler install Hunter

And with a plastic ball valve, that won’t happen. The worst thing that can happen is it breaks, but it’s a lot cheaper to fix then a gate valve. So you always want to put an isolation valve and um, the isolation valve is so you’re able to turn the water off to your system if you need to. Um, say there’s a leak like in your main line and it’s leaking consistently and it won’t stop leaking. Even though the sprinkler system is turned off, you’re going to want to turn your isolation valve officer. You’re not running up your water bill or causing a huge puddle in your yard. I’m turning off the isolation valve is also a part of winterizing your system. So you will definitely want an isolation of off for that because if you don’t win a riser system, um, you’re backflow has a pretty good chance of freezing over the winter and you don’t want that to happen cause that’s about a 200 $300 fix. Now we do do winterization, we charge $45. That’s just a fee just in case anything does happen to your backflow. So if anything does happen to your rack flow, we will come and fix it since you pay that $45 and we’ll fix it for free. sprinkler install So we’re not going to charge that 200 or $300. She kind of just some insurance to let you know that your bag backflow won’t break. But if it does, we’ve got your back. No, if you continue to,

look to see if you continue on that subject on sprinkler installed. Um, we also come in and turn your system on in the spring. Now all we do there is we turn your system on. We run through the whole thing. Check for breaks, anything along those lines, things that need to be done, adjusting heads, um, programming controller properly, however, or whatever needs to be done. We will do it now. That costs $75 for us to come out and do. Um, that is about it with a sprinkler instill. Um, you can come out to living water, irrigation.com. I’m sorry, living water, irrigation, ok.com and see what we have to offer. And if you’re interested in, give us a call. Um, it’d be much appreciated so that we could do your sprinkler installed for you. Uh, my name is Michael Reed and thank you for listening. sprinkler install Hunter